We are on Wurundjeri soil, and we would like to acknowledge the original owners and custodians of this land, both past, present and future.

Since the release of Bruce Pascoe’s Dark Emu: Black Seeds, Agriculture or Accident? (2014), Bill Gammage’s The Biggest Estate on Earth: How Aborigines Made Australia (2012) and Charles Massy’s Call of the Reed Warbler: A New Agriculture, A New Earth (2017), there has been a flood of interest surrounding Indigenous agriculture in Australia.

These seminal works have rewritten Australia’s history, forcing us to reconsider the hunter-gatherer label for pre-colonial Aboriginal Australians. Bruce Pascoe’s Dark Emu examines the journals of early explorers, revealing an established society in which “people did build houses, did build dams, did sow, irrigate and till the land [and] did alter the course of rivers.” Exerts from Charles Sturt’s diary, along with ample other colonists, described grain harvests, the domestication of food plants and the trade of seeds. These examples expose a sophisticated and advanced system of agriculture.

While interested in bringing these achievements to light, Pascoe also makes a point that Indigenous farming methods - particularly the cultivation of native grains – has a role to play in the future of Australian agriculture.

Compared to common cereal crops - such as wheat, barley and sorghum - the domestication of our native flora holds ample economic, social and environmental benefits. Particularly now that we are experiencing the effects of climate change.

Adapting to a changing climate

Australia is the driest inhabited continent in the world. More than half of the country receives a yearly rainfall of less than 300mm. With global temperatures increasing, experts predict that rainfall will become even more sporadic. There has already been significant drying recorded across southern Australia, while extreme heat events are becoming more frequent.

Cultivating native plants is one way to cope with global warming.

Plant species endemic to Australia have adapted to our arid climate and nutrient poor soil. They are resilient against drought and heat, and can still provide a successful seasonal yield. Native legumes or grain crops do not rely on expensive fertilizers and pesticides, nor do they require heavy irrigation. Plus, unlike current European agricultural practices which strip our soil of key nutrients, the cultivation of Indigenous grains will improve soil quality.

Australia’s native flora could support the profitability and environmental sustainability of domestic agriculture. Yet it has been largely ignored by both the scientific and farming communities.

As Pascoe explains in Dark Emu, “the dearth of research on these plants should not imply a lack of evidence, but rather a lack of interest and will to explore Aboriginal interaction with the plant communities of Australia.”

Fortunately, over the past ten years, researchers have noticed the sophistication of Aboriginal farming methods and begun examining Indigenous plants.

Panicum decompositum (commonly called barley grass or native millet), sorghum macrospermum (wild sorghum) and O. rufipogon and O. meridionalis (native rice) are seen as having the greatest potential for commercial development. Native millet and sorghum are vigorous crops. They require little fertilizer, produce medium to large grains, are relatively cheap to grow, reduce water run-offs and have the same, if not higher, nutritional value as common cereal crops. As they are perennials, there is no need to plough or till the land after the plant has been established. Leaving soil undisturbed will greatly reduce the overall CO2 emissions of the Australian agricultural sector. Currently, farming systems are responsible for about 13% of our total greenhouse gas emissions.

The grain that has spiked the most interest is native rice. Native, or ‘wild rice,’ has been harvested by our Indigenous population for thousands of years and continues to be grown in some communities. It is similar to commercial rice, reddish in colour, disease resistant and abundant across waterholes and lagoons in northern Australia.

The native rice even “tastes good” says Professor Robert Henry from The University of Queensland, with potentially “more beneficial health qualities than other rice species.”

Wild rice continues to hold significant potential for economic development in the Asia-Pacific. It has been used by Japanese rice companies to cross-breed certain characteristics into commercial Ozyza Sativa strains (it is thought that some Asian rice varieties are undergoing deleterious changes). It also has a high market value, particularly in Australia, as products that are organic, gluten-free and nutrient-dense are becoming increasingly popular.

Cultivating native crops would not only benefit our natural environment, it would also restore Indigenous peoples’ economic and socio-political livelihoods.

A native rice enterprise, for example, could provide communities living on floodplains with economic, cultural and social benefits.

Bruce Pascoe’s food group Gurandgi Munjie has already begun this transformation. The collective, which is run by Indigenous Australians, has been trialing murnong (a small sweet potato), native millet and kangaroo grass.

Dark Emu recovered an accurate version of Australian history. It has brought Indigenous traditions back into focus and spread awareness of Aboriginal agriculture. Pascoe also created a vision of a shared future; where the knowledge and skills of Australia’s First People are used to create an environmentally and economically sustainable agricultural system. We must encourage and support further research of native food plants as “our future prosperity demands they be given serious consideration.”

Incorporating native Australian food plants into our urban gardens gives us the opportunity to celebrate and promote Indigenous permaculture, and to learn about the plants that are native to our land.

To increase the diversity and resilience of your small garden, here are five great native plants to start with. 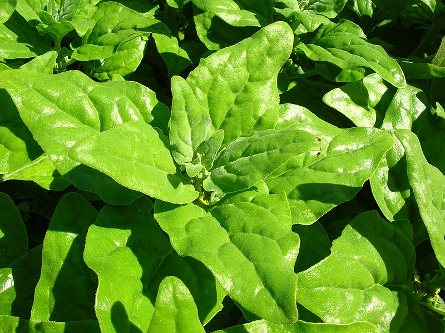 Flavour Profile: Warrigal Greens have a fresh, grassy flavour with a slightly bitter finish. The leaves should be treated like Silverbeet, and always blanched before using.

Growing region: Warrigal Greens grow from Victoria to Queensland, from coastal areas up to the forest.

Position: Enjoy full sun or some shade in arid areas, and well-drained soil. They make a perfect living mulch underneath a potted citrus tree, and thrive in larger areas.

Flavour profile: The blue fruits can be eaten raw, and have a sweet flavour that becomes nutty after the seeds are chewed. The soft crunch from the seeds make it a great fruit for cooking, offering a similar texture to poppyseed or teff.

Growing region: Blue Flax Lily’s grow naturally from Victoria to southern Queensland, putting up with a range of growing condition.

Position: A hardy perennial herb that can grow up to a meter high and wide. Perfect for planting in the dry corner of a bed or in a pot. 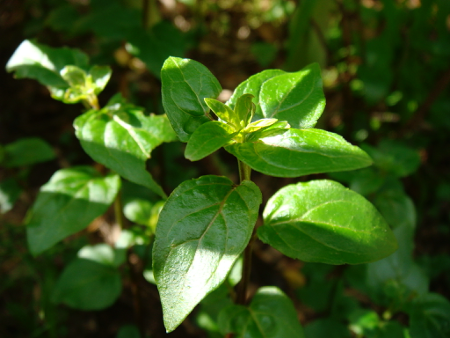 Flavour profile: Native River Mint is a relative of peppermint and spearmint, with a strong minty aroma and flavour. Can be used as substitute for cultivated mint in cooking, teas and medicinal purposes.

Position: Prefers an area with lots of moisture and shade, but will also grow in sunnier and drier parts of the garden. 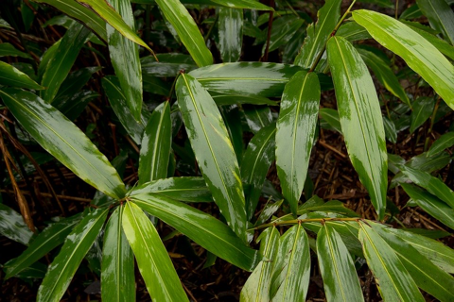 Flavour profile: The young shoots offer a mild, tangy ginger flavour and can be used as an excellent ginger substitute in cooking. The flesh of the bright blue berries can also be eaten, which have a tangy and citrusy flavour. The beautiful green leaves are great for wrapping food for cooking, particularly fish and prawns, as it infuses them with a mild gingery taste.

Position: Native Ginger is a very hardy plant that prefers full shade and moist well-drained soil, however it will tolerate part to full sun. Native Ginger is not frost tolerant, and can grow up to a few meters high if allowed. 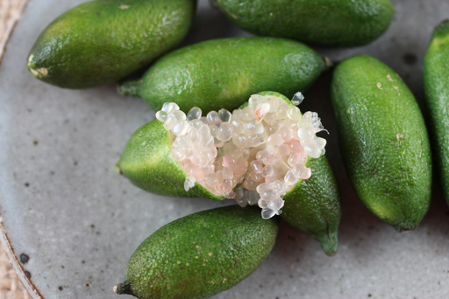 Position: They can grow in the ground or a large pot, and make a great hedge. The plant requires part-shade to full sun. In cooler climates, it is a good idea to plant Finger Lime’s in a north-facing site.